Jobe graduated from Lee High School in Columbus, MS; then attended the University of MS, where he attained a Bachelor of Arts degree, double majoring in Chemistry and German and graduating in 1957. Wilder was a member of Sigma Nu Fraternity and an honored member of the Pride of the South Ole Miss Marching Band. After completing his undergraduate work, he entered the United States Navy as an officer.

In 1959 Jobe married Peggy and they moved to Jackson, Mississippi where he began attending medical school at the University of Mississippi Medical Center. Dr. Wilder completed his residency in orthopedic medicine in Jacksonville, Florida and subsequently returned to Jackson to begin private practice with Dr. Thomas W. Talkington in southwest Jackson. Jobe was on staff at Hinds General Hospital and practiced medicine there for more than thirty years.

This engaging conversationalist and storyteller was an avid, some might say rabid, sports fan, especially when it came to Ole Miss Football, but would watch any and all sports. Recently he was caught watching girl’s fast pitch softball. He was crazy about a good joke and his anecdotes frequently left those around him in stitches. Jobe enjoyed fishing, studying World War II memorabilia and visiting those sites, singing in the church choir and listening to a plethora of all college football fight songs.

A celebration of the life of Dr. Wilder will be held at the Episcopal Church of the Creator in Clinton, MS on March 4, 2021 @ 11:00 am CST. This will be a private service for immediate family only; however, the service will be available via Zoom. Please contact the family or church office for the link.

In lieu of flowers, please feel free to make a donation in Dr. Wilder’s name to the Episcopal Church of the Creator or your favorite charity.

In all discourse, Jobe’s parting words were always: “Go to Hell LSU and State college too”. 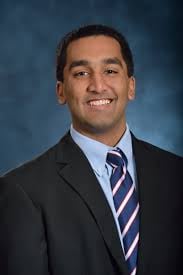 The Deloitte Foundation announced recipients of the 2021 Doctoral Fellowships in Accounting Award, with grants totaling $250,000 awarded to 10 Ph.D. candidates.

The Deloitte Foundation has awarded $25,000 grants to 10 top accounting Ph.D. candidates across the U.S. through the Deloitte Foundation’s annual Doctoral Fellowship program. Given to students who plan to pursue academic careers upon graduation, the award is intended to support the 2021 recipients’ final year of coursework and the subsequent year to complete their doctoral dissertation.

While an undergraduate at Ole Miss, Anish was awarded the 2014 Sigma Nu Fraternity Man of the Year award. That same year he also won the Scholar of the Year based on outstanding academics.

The Deloitte Foundation, founded in 1928, is a not-for-profit organization that supports education in the U.S. through a variety of initiatives that help develop the next generation of diverse business leaders, and their influencers, and promote excellence in teaching, research and curriculum innovation. The Foundation sponsors an array of national programs relevant to a variety of professional services, benefiting high school students, undergraduates, graduate students and educators. Learn more about the Deloitte Foundation.

Born on September 19, 1931, in Charleston, MS to Harold Hammond Hutchins and Eleanor Robinson Hutchins, Wiley graduated from Charleston High School in 1949. He then enrolled at the University of Mississippi in Oxford where he joined Sigma Nu fraternity, twice serving as its Commander. He graduated with a Bachelor of Arts degree in 1953 and subsequently earned a Bachelor of Science.

Wiley married the love of his life, Mary Janice Morris of Macon, MS, in November 1953, and shortly thereafter, he entered in the U.S. Air Force as a first lieutenant. For most of his service, Wiley was stationed at Nouasseur Air Base in Casablanca, French Morocco, North Africa. He was discharged from the Air Force in late 1955, and resumed his education.

Wiley received his medical degree in 1960 from the University of Mississippi Medical Center at Jackson, and while there, he served as student body president. Wiley continued his medical training in Memphis, first as an intern at the City of Memphis Hospital and then as a general surgery resident at the Kennedy VA Hospital. He completed his training with a three year fellowship in orthopaedic surgery at The Campbell Foundation. He remained at the Campbell Clinic first as a member of the staff and subsequently as a partner. Wiley served as orthopaedic consultant to the Memphis State University Athletic teams and to the Liberty Bowl.

In June of 1977, Wiley and his family moved to Columbus, MS, where he founded the Columbus Orthopaedic Clinic, P.A. Soon thereafter, he became the team orthopaedist for the Mississippi State University athletic teams. He retired from the practice of medicine in 1996.

All of Wiley’s professional and community activities are too numerous to list, but included serving as president of the Mississippi Orthopaedic Society and as the Mississippi Representative on the Board of Councillors for the American Academy of Orthopaedic Surgeons. He was also an advisory member of the National Athletic Trainers Association and a contributor to the Orthopaedic Research and Education Foundation. In Columbus, Wiley was a member of the Columbus Rotary Club and is a Paul Harris Fellow. In 1996, Wiley was selected as King of Junior Auxiliary Charity Ball. He served on the Boards of Directors for Heritage Academy, First Columbus National Bank, and the Friends of the Library.

In his free time, Wiley stayed busy landscaping his yard and gardens or working and hunting on the farm he shared with his son. Most of all, Wiley loved his family and enjoyed spending time with them whether at home or traveling. Wiley never met a stranger and he will be remembered by many for his baby blue eyes, beautiful smile, penchant for sweets and his never-ending generosity with his time and talents.

Wiley was a member of the Church of Christ, but most recently attended First United Methodist Church in Columbus, MS.

We’re excited to share that Epsilon Xi achieved the highest chapter GPA of all IFC organizations for the Fall 2020 semester. Our members put in hard work to earn a 3.41 Chapter GPA amidst the COVID-19 Pandemic and it clearly shows! 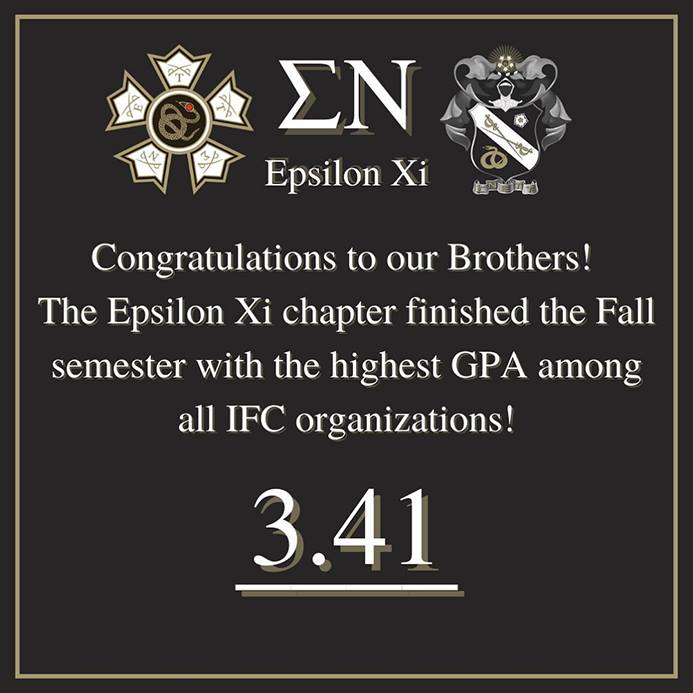 The Epsilon Xi chapter would like to extend a collective thank you to all who contributed to Sigma Nu Foodstock 2020! With your help and support, we were able to donate more than $4,500 and hundreds of canned goods to Oxford Food Pantry and @grovegrocery! As a result, Sigma Nu was awarded 1st place in Grove Grocery’s recent food drive competition! Check out both of these organization to see the fantastic work they are doing on campus and in the community.

Sigma Nu is pleased to announce that Anna Claire Waldrop of Horn Lake, MS, will be the recipient of the 2021 Sigma Nu Charity Bowl. Read Anna Claire’s story.

END_OF_DOCUMENT_TOKEN_TO_BE_REPLACED

The Epsilon Xi Chapter is proud to announce our recognition of Rock Chapter. Rock Chapter distinctions are the highest honor a chapter of Sigma Nu can attain and are given in recognition of a chapter achieving and maintaining excellence in all chapter operations for a sustained period of time. Rock Chapters are only granted the award for attaining an ideal or nearly perfect state across a broad range of fraternity operations. Congratulations to all of our brothers, past and present, who continue to contribute to the success of our chapter! 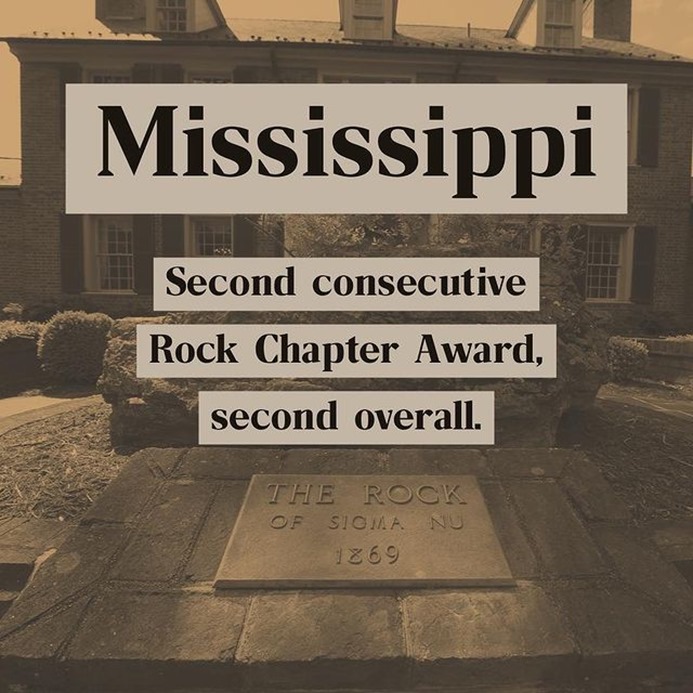 The Epsilon Xi Chapter is excited to announce that over $168,000 was raised for Charity Bowl 2020! This morning, Philanthropy Chairmen Nathan Foxworth, Ford Gordon, and Cole Barnhill were able to FaceTime this year’s recipient, Emmie Brookins, to share the news with her. The money raised will help Emmie purchase the equipment needed to transform a car so that she can drive again. Our other recipients include the William Magee Center for Wellness Education, the Blair E. Batson’s Children’s Hospital in Jackson, and the Manning Family Fund. We are beyond appreciative of the continued support from all donors, active members, and alumni, especially during the current global pandemic. 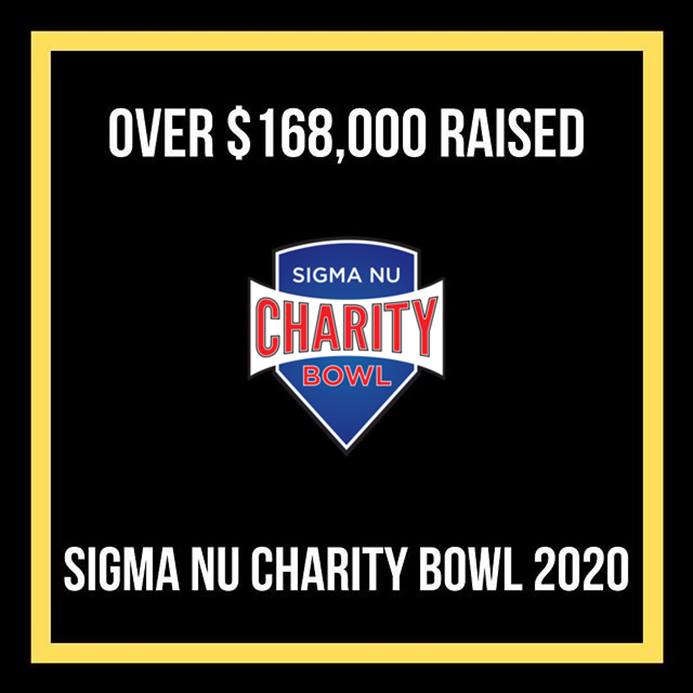