Sigma Nu is pleased to announce that Emily Lynn Brookins of Memphis, TN, will be the recipient of the 2020 Sigma Nu Charity Bowl. Read Emily’s story. 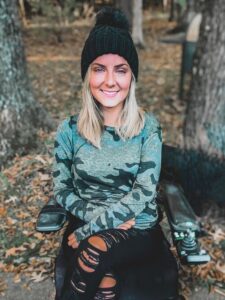 Emily Lynn Brookins was born May 25, 1995 in Memphis, TN. She goes by Emmie. She graduated from Arlington High School in 2013. She currently lives in Lakeland, TN. Her father is Shane Brookins. Emmie is one of four children, which have been raised solely by their father since Emmie was 10 years old.

At the age of sixteen, Emmie was involved in a car accident that left her a quadriplegic. She was a passenger in a car that struck a tree. The only thing she remembers is suddenly she felt the inability to move or breathe. She was airlifted to the Med. She had suffered injuries to her cervical spine and damaged her spinal cord. She underwent eight hours of emergency surgery to help stabilize her spinal injuries. After awakening from surgery, she had no idea the extent of her injuries. She could only bend her right arm, barely move her neck and thankfully was able to breathe on her own. She spent one week in the ICU in Memphis and was then transferred to the Shepherd Center in Atlanta. Shepherd Center specializes in spinal cord and brain injury rehabilitation. After four months at Shepherd Center, Emmie became stronger and gained the ability to bend both arms and gain slight movement in her wrists.

After eight years as a quadriplegic, she is finally learning who she is again. She is able to feed herself and put on makeup, which are huge accomplishments. She is finally realizing this is her way of life now and she is going to embrace it. She is a talented video maker, starting her own Youtube channel called EMMIELYNN, where she shares her life and thoughts. She feels her purpose is to share positivity to help others. She believes life isn’t about what she can or cannot do, it’s about what she has to offer. Her hobbies include photography, videography, editing, graphic design, blogging and reading. She also enjoys spending time with family and friends, being outdoors, traveling and physical therapy. She loves animals, sports, sushi, outer space and Jesus. She’s very outgoing and loves making new friends. Her favorite quote is “Remember to look up at the stars and not down at your feet’ by Stephen Hawking.

Now, at the age of 24, Emmie has the desire to gain more independence. She is beyond thankful to be chosen for this awesome charity. Her dream is to be able to drive. This would allow her to live life to its fullest, as God has planned for her.