Sigma Nu is pleased to announce that Marcus Banks of Louisville, MS, will be the recipient of the 2015 Sigma Nu Charity Bowl. Read Marcus’ story. 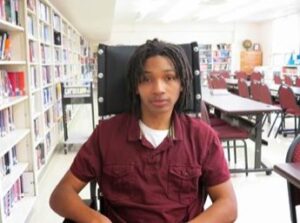 The 2015 Charity Bowl recipient is 16-year-old Marcus Banks of Louisville, MS. He was injured on April 22, 2014 during spring football practice at Louisville High School. A helmet-to-helmet collision injured his spinal cord at the C-5 level. Marcus was attended to immediately after going to the ground following incidental contact to the head. He was airlifted from the practice field to the University Medical Center in Jackson where he was placed in the ICU. Marcus is now considered a quadriplegic, but he has undergone procedures to relieve some pressure on the spine and has shown some improvement in movement of his extremities. He is being taken care of by his father, who is on disability himself from an accident that caused a back injury. Marcus is now back in school as a junior, taking advanced classes and making good grades. He plans to go to college after completing his senior year at Louisville High School. The Banks Family is struggling financially and could use help with his medical expenses and college costs. Louisville High School Director of Athletics Hilute Hudson said the community response to Banks and his family has been overwhelming since the injury occurred. Marcus is just beginning his journey on the road to recovery so there is still much work to be done, but with the help of Sigma Nu Charity Bowl some of the pain they are suffering can be alleviated.